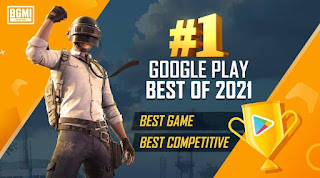 BGMI
Google is back with another year of the best apps and games in the Play Store this year. The Google Play’s Best of 2021 winners in India include some expected names like BGMI, Garena Free Fire and Clubhouse. This year’s winners for different categories also include many learning apps.The best game of the year is Battle Ground Mobile India (BGMI) developed by Krafton as an India-exclusive version of the banned PUBG Mobile. BGMI launched earlier this year in July after much fanfare and also some delays. Another popular title that won the Users’ Choice pick is Garena Free Fire MAX. This game is so popular it topped the overall downloads on Android and iOS globally in October, according to data from Sensor Tower.More games like MARVEL Future Revolution and Pokemon Unite by The Pokemon Company made it to the most competitive apps of 2021. The indie game winners of this year include Bird ALone, DeLight: The Journey Home, Huntdown, and My Friend Pedro: Ripe for Revenge.
Playstore
Freefire
As for the coveted ‘Best App’ of the year in India, it’s Bitclass, a platform enabling interactive cohort-based learning. This app features live and interactive classes on topics like software tools, languages, tech skills, hobbies and more. Google said this app highlighted the “emergence of a digital learning culture in India fueled by innovative localized solutions.”Minecraft
The Users’ Choice App of 2021 is Clubhouse, the app that created a new niche of social audio platforms. Clubhouse launched first in iOS last year, and its Android version was released earlier this year. Clubhouse also led to many rivals including Twitter Spaces, Facebook’s live audio rooms and more.Clubhouse also made it to the list of apps ‘Best for Fun’ along with apps like FrontRow and Hotstep that lets you learn singing, music, stand-up comedy, dancing and more. The ‘Best Hidden Gems’ apps include Jumping Minds, an app that lets you share your feelings and stories with people from around the world, FWD another learning platform and Moonbeam, a podcast discovery app.
Thanks for reading
This time best game award is won by BGMI
Written By Uddipta Udayan Gogoi
Thank you
Please support our website www.newsesportsindia.in
Tags:
Playstore